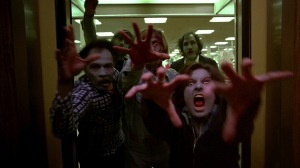 In his critique of capitalism, Capital, Karl Marx wrote: “Capital is dead labour, which, vampire-like, lives only by sucking living labour, and lives the more, the more labour it sucks.” And whilst that may be succinct metaphor, useful for getting the peasants to rise up and spread the crimson scourge across Europe, legendary filmmaker George A. Romero had a better one. Zombies.

Dawn of the Dead, the 1978 sequel to Romero’s breakout hit Night of the Living Dead, can best be described as ‘consumerism horror’. AKA the go-to trope of Seventies’ dystopian cinema. Romero had, ten years previously, codified the zombie genre with Night, turning it from stories about voodoo-brainwashed ‘zombies’ controlled by white Westerners to a genre about flesh-eating undead.

The first film established exactly what a zombie was in Romero’s mind. They’re neigh-unstoppable monsters who kill indiscriminately and spread disease. Undead. But they’re also faceless representations of society’s greatest fears. Romero’s zombies are barely mobile and little threat on their own, but they’re limitless and the catalyst for humanity’s most base behaviours.

With the groundwork already in place, Romero’s sequel was broader in scope and solidified the zombies as social commentary aspect. Whilst the previous film dealt with racism, this one took aim at rampant consumerism and dehumanising capitalism. Because consumers slavishly consume…get it? 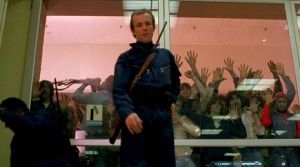 Society has been plunged into utter chaos. The living can barely contain the dead, both mobile and otherwise. Infection spreads through the squalid slums and humanity makes decisions which only serves to make the situation worse. Religious delusions cause complications, the experts have no answers, and those sworn to protect give in to weakness. The main four abandon their stations and steal the WGON helicopter – hoping to escape to a sanctuary beyond the decaying cities.

Unfortunately, their idea of a sanctuary happens to be a shopping mall. On the one hand, it has everything they need to live like a hedonistic Medieval King – weapons, fancy clothes, all the food and booze they could want. But if you have ever lived in a city which has a disproportionate number of people to the number of shops, then chances are you’ll already know the type of hell awaiting them. Hell, as Oscar Wilde once said, being other people. The ragtag group make a go of it for sometime before things inevitably hit the fan and they begin to die. 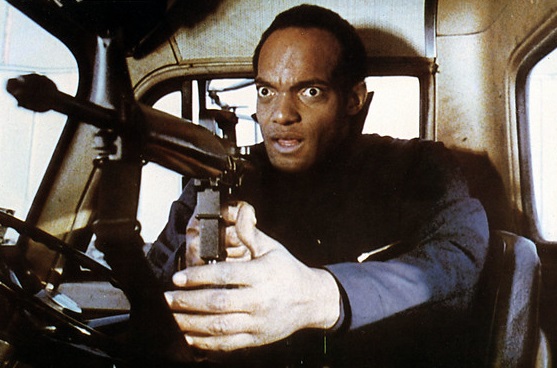 There’s a lot about Dawn of the Dead which holds it above its predecessor. It’s bigger in scale for one. Instead of being some backwater nightmare, Dawn deals with the breakdown of civilisation in its entirety. The first twenty or so minutes are set in the city, as the burnt-out SWAT team clear out a tower block in which humans are hiding their undead relatives.

It’s grim work, clearing out the tower block, and presented as just another gruelling day in a struggle which humanity is failing. Everything looks shabby. The people are worn down, the tower block is filthy and evokes images of slums and disease, and what little rule of law remains has turned brutal. A racist cop guns down innocent minorities.

Even the news team presented during that part of the film are haggard and directionless. A news reporter (David Early) debates a scientist (David Crawford) live on air about the ethics of disposing of the dead – with the scientist getting in the killer line of “They can be killed by destroying the brain or severing the head from the rest of the body”.

It’s a vital component of the film in my opinion. Most zombie films rush through the downfall of society part entirely. The viewer actually witnessing the death of human civilisation, provides some much needed context to proceedings. Firstly it provides the pathos of humanity’s sad end, but it also shows how incapable humans are in the face of a major world changing crisis. Just think how useless the average office worker is when the printers stop working and imagine that on a global scale. 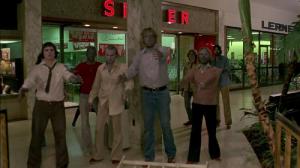 Dawn of the Dead also presents a clear metaphor which forms the entire film, instead of simply serving the bleak ending. The idea of a shopping mall as sanctuary says a lot about the values of our society. Not only do the humans hide inside of it, but the zombies flock to it…out of instinct. Just as you don’t really need that £80 cat painting, the zombies don’t actually need human flesh. They just want it. Some residual consumer drive that’s been drilled into them throughout their prior life. Like the sort of frenzy which drives you on pay day.

Unlike the first and third films which play out like siege movies, for the vast majority of Dawn the protagonists live in their own libertarian paradise. In their estimation the zombie apocalypse has likely improved their lives. At one point Stephen says to Fran, “this place is terrific. It really is, it’s perfect. All kinds of things. We’ve really got it made here, Frannie”.

In a nice subversion of the original film (in which the lead woman was the least capable), Fran is the only one who refuses to wholly give in to the all-consuming materialism: “I’m afraid. You’re hypnotized by this place. All of you. It’s so bright and neatly wrapped, you don’t see that it’s a prison too.”

The human survivors trade their battle-forged gear for luxury and they’re willing for the mall to become the hill on which they plant their flag. Roger is bitten, and slowly dies, attempting to secure the mall. His final thoughts on all the stuff the group has. Towards the end of the film, the remaining three survivors fight off an invading biker gang – in order to defend their stuff. The biker gang was an actual biker gang who showed up on their actual motorbikes, and in the film they’re led by Tom Savini. Because who else? 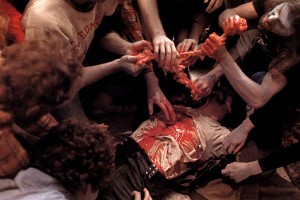 Of Romero’s ‘…Of the Dead‘ trilogy, Dawn is often cited as the best. Although I prefer the final film, Day of the Dead, I can certainly see the appeal of Dawn. It’s the biggest in scale and it certainly raised the bar for the zombie genre. Following the film’s release the golden age of zombie films began in earnest, with the likes of Zombi 2, City of the Living Dead, Zombie Holocaust, The Beyond, Burial Ground, The Evil Dead, The House by the Cemetery, and it’s own 2004 remake to name a few. The lineage of zombie films is as murky as that of the council house family who live near me (their kid has webbed toes).

Dawn of the Dead is certainly a lot more hardcore than Night. Savini took over as effects man on this film and it shows. Heads explode in clouds of gore, intestines are ripped out, machetes buried into skulls, and chunks of flesh eaten. The film makes excellent use of its vibrant colour palette. I think the film has a little too much fun if you ask me. Outside the claustrophobic opening act, the zombies are barely intimidating. And once the film gets going they’re outright humiliated, struggling on ice rinks and having pies smashed into their faces.

Once again, Romero’s zombies are a mixed bag. The extras act as though the only instruction they were given was to shuffle like they’ve got a dead leg in class and have to go up to the front. Some don’t even do that, and charge towards our heroes as though they’ve said there are only two genders. The switch to colour means the extras get to do all this covered in pale green or grey paint. Or, if they’re a really dangerous zombie, a smattering of gore.

The characters are also less defined, hijacked by ‘the message’. Once they’re away from their tired dying world, and their thankless responsibilities, they’re free to become a vehicle for the film’s anti-consumerism message. Transformed from disciplined, battled-hardened figures, to greedy, cocky, and reckless.

Ultimately, Dawn is Romero at his peak. He presents us with a gross spectacle, desiring that we be both sickened and entertained, and yet he still has a message for us. It’s not as unrelentingly bleak as its predecessor, and it’s not as tightly wound as its sequel. Dawn has an important message about society and the human condition, but it’s also steeped in gratuitous spectacle.

Antrum: The Deadliest Film Ever Made (2018)
Went on something of a #studioghibli binge over the holidays. Specifically those directed by #hayaomiyazaki
Cool film picture-quiz mug that someone bought me for Christmas. A little disappointed that I only got 38 out of 50! Getting a little rusty...
Messiah of Evil (1973)
House 3: Horror Show (1989)
Halloween III: Season of the Witch (1982) has a bad rep but it is genuinely one of my all time favourite horror films.

British-born writer who grew up on a steady diet of cult films, heavy metal, fantasy novels, and video games. Ash E. Bailey has written for Whatculture, Denim and Leather Metal Magazine, and has written reviews for 10+ years.