“You gotta ask yourself a question…Do I feel lucky?” There are few moments in life as indelible as your first meaningful encounter with cinema.

For me it was Dirty Harry’s iconic “do you feel lucky punk?” scene. A film that, for all its gritty violence and fascist moralistic leanings, brought me back to the innocence of my childhood. I recall that, growing up, I would often find myself sat with my mother and watching the old spaghetti westerns on TV. A sub-genre rooted in Japanese samurai movies, and mastered by the likes of Sergio Leone, Tonino Valerii, and Sergio Corbucci.

Young as I was at the time, I was unable to appreciate these masterpieces as masterpieces of film: merely enthralled by the sheer spectacle of it all. But the inner workings of films such as High Plains Drifter and The Good, the Bad and the Ugly, etched themselves into my mind regardless.

Subconsciously I found myself constantly coming back to the interplay between light and dark – the use of Chiaroscuro in High Plains as the shadowy drifter makes his way through the dimly light bar, highlighting his status as one of the dead, forgotten by the rest of society. In The Good, the Bad and the Ugly, dark ominous figures stared each other down over unforgiving sun scorched plains – quiet to all but the encroachment of nature and Ennio Morricone’s lonely soundtrack.

The iconic scene of Dirty Harry Callahan casually strolling out of greasy spoon dinner, magnum in hand, across the sun-kissed urban San Francisco plain is, in many ways, the ultimate extension of the spaghetti western motif. Bringing the uncompromising morality of the Wild West to the mean streets of the detective thriller, opened a range of possibilities.

More importantly, however, Dirty Harry provided the context for the cinematic techniques I enjoyed in those spaghetti westerns, but not necessarily understood. The Wild West was such an overtly cut-throat landscape that in my youth I didn’t really appreciate the symbolism. But the spaghetti western dualities and symbolism found a more fitting home in an era of 70’s police brutality and corruption; I always knew outlaws were dangerous, but, in my innocence, it seemed unimaginable for a cop to be like that. To be a modern day man who made his own rules and lived by the gun – existing like the eponymous High Plains Drifter in his own dimension within society.So for Detective Harry Callahan, in his uncompromising brutal world-view, to shoot and taunt his enemies like an outlaw anti-hero, it felt like the final piece of the puzzle. And suddenly I ‘got’ the spaghetti western. Which is why Dirty Harry stands as THE film for me. 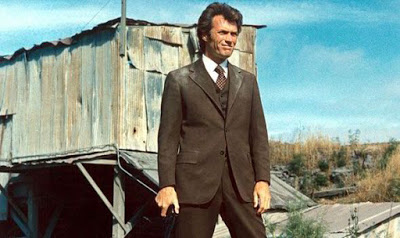 Antrum: The Deadliest Film Ever Made (2018)
Went on something of a #studioghibli binge over the holidays. Specifically those directed by #hayaomiyazaki
Cool film picture-quiz mug that someone bought me for Christmas. A little disappointed that I only got 38 out of 50! Getting a little rusty...
Messiah of Evil (1973)
House 3: Horror Show (1989)
Halloween III: Season of the Witch (1982) has a bad rep but it is genuinely one of my all time favourite horror films.

British-born writer who grew up on a steady diet of cult films, heavy metal, fantasy novels, and video games. Ash E. Bailey has written for Whatculture, Denim and Leather Metal Magazine, and has written reviews for 10+ years.